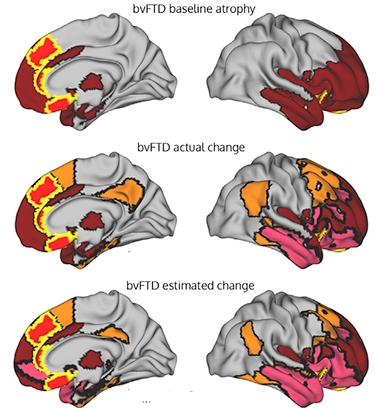 Specific regions of the brain are atrophied in neurodegenerative diseases, however, physiological differences from one patient to another make it difficult to predict the progression of neurodegeneration in a specific individual.

An important theory of the progression of neurodegenerative diseases is that misfolded pathological proteins move from one neuron to another via trans-synaptic propagation. Seeley and his colleagues, but also others like H Braak have previously proposed, based on this idea, that the disease begins in an area of ​​the brain, the epicenter, and spreads into new, functionally connected regions.

Most of the information in this regard came from cross-sectional data. It remained to be seen whether such a model predicted longitudinal atrophy in individual patients. In the present study, the authors sought to do just that in patients with frontal variant behavioral dementia (bvFTD) or the semantic variant of primary progressive aphasia (SVPPA), two forms of frontotemporal dementia with schemas distinct from atrophy. They hypothesized that, in a particular disorder, individual patients would have distinct epicenters that would dictate differences in the overall progression of the disease.

In general, epicondensons overlap in patients with the same syndrome. In patients with bvFTD, they most often resided in the anterior cingulate cortex and fronto-sinus cortex. In people with svPPA, the epicenter tended to be close to the anterior temporal lobe. Even in this case, the exact location of the epicenters still varied considerably from person to person. Interestingly, although these epicenters have always shown signs of atrophy, they were not necessarily the areas of greatest loss of volume. Within each disease, patterns of atrophy differed considerably from person to person.

Scientists led by Jesse Brown and Bill Seeley of the University of California, San Francisco, used a single structural MRI in 72 patients with frontotemporal dementia to predict which regions of their brain would succumb to the disease.

They were able to determine the probable origin of the disease - its epicenter - and used functional connectivity maps to extrapolate areas that may subsequently atrophy during disease progression. Their predictions seem indeed correlated with the loss of brain volume in the following years. the authors suggest that this method provides an individualized biomarker for clinical trials and also for early diagnosis. Brown and colleagues show that the key biology at play in neurodegenerative diseases involves the functional physiology of large-scale brain networks that support mental functioning. As in previous studies, the methods used in this study do not differentiate competing patterns of networked neurodegeneration.

To identify areas that could atrophy as the disease progressed, researchers developed a forecasting model that took into account three factors: the functional link of a region to the epicenter, the narrowing of its closest neighbors and the loss of reference volume. From there, the researchers determined the probable atrophy patterns of 42 volunteer patients of bvFTD and 30 patients with svPPA. These participants then performed an average of three additional separate analyzes of six to 14 months, and the researchers compared the expected results to the actual loss.

Two aspects of the study are particularly noteworthy. The first is the idea of ​​a model of personalized prediction of longitudinal atrophy of the brain, based on the hypothesis of trans-neuronal propagation. The second is the introduction of a concept called "nodal risk", which is a measure of the regional risk of future atrophy based on the degree of basic atrophy in highly functionally connected regions. Compared to previous group-level approaches, an individualized metric of the rate and directionality of impending brain atrophy has important potential ramifications for clinical practice and clinical trials. For example, because cerebral atrophy is closely related to the clinical progression of the disease, this method based on connectivity can be useful for the prognosis of various neurodegenerative diseases. In addition, the placebo and treatment groups could be carefully compared to the atrophy rates expected during clinical trials.

In addition, identifying a group of "fast progressors" may allow for more effective screening of drug candidates (ie, shorter duration and fewer people).

The researchers found that the rate of volume loss differed across brain regions. For the most part, these patterns of atrophy were quite similar, with a correlation coefficient of 0.65. For 16 patients, including 13 with bvFTD, the model did not predict volume loss, with an average correlation coefficient of -0.04. Most of these patients had limited initial atrophy and a confused epicenter. The strongest contraction occurred not in the epicentres themselves, but in their first-degree neighbors. Perhaps the epicenter had already degenerated as much as it would, while the first-degree neighbors were just beginning, the authors said. "This has fundamental implications for clinical trials that would use indexes derived from imaging as a result," wrote Bejanin. "The best areas for evaluating the effect of disease-modifying drugs should not be those that are primarily affected by the disease, nor the most atrophied, but those most connected to these areas."

The method requires important information about the emerging neurodegenerative pattern, which may hinder application in the early stages of the disease. It is not yet refined enough to be used in clinical trials. In this study, grouped data on the functional connectome of a group of healthy people were used to predict connectivity, but using a patient's own connectome would likely improve predictions. With greater accuracy, this model could provide a proof-of-principle indicator for early-to-intermediate-stage clinical trials. For example, if a therapy causes less atrophy than expected, it could encourage stakeholders to conduct a confirmatory test.

However, although it is highly correlated, atrophy is not equivalent to the underlying pathology. Thus, some of the direct effects of the pathology on cognition and / or behavior (i.e., mediated by atrophy) may not be captured.

a more distant goal is to predict enough atrophy to predict the symptoms that patients may expect in the future. This model may be useful in other neurodegenerative diseases, including Alzheimer's disease, although the dual proteininopathy of Aβ and Tau protein is likely to make the situation more complicated.

The end of the amyloid plaque hypothesis for Alzheimer's... END_OF_DOCUMENT_TOKEN_TO_BE_REPLACED

Oligomerix shows that a small...

Searching for a TDP-43 therapy Genetic therapies against... END_OF_DOCUMENT_TOKEN_TO_BE_REPLACED

END_OF_DOCUMENT_TOKEN_TO_BE_REPLACED

Scientists from Korea and Germany, shown that human fibroblasts can be...

END_OF_DOCUMENT_TOKEN_TO_BE_REPLACED

Calcifediol as a biomarker of ALS progression

END_OF_DOCUMENT_TOKEN_TO_BE_REPLACED

We have presented on several occasions a summary of drugs that can be used...

END_OF_DOCUMENT_TOKEN_TO_BE_REPLACED

It has long been assumed that lifespan and health are strongly correlated,...

END_OF_DOCUMENT_TOKEN_TO_BE_REPLACED

Searching for a TDP-43 therapy Genetic therapies against TDP-43 aggregates...

END_OF_DOCUMENT_TOKEN_TO_BE_REPLACED

Post Intensive Care Syndrome (PICS) describes a set of disorders that are...

END_OF_DOCUMENT_TOKEN_TO_BE_REPLACED

The end of the amyloid plaque hypothesis for Alzheimer's disease Nearly...